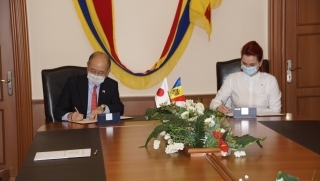 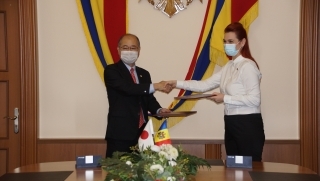 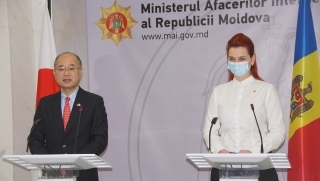 On November 26, H.E. Katayama Yoshihiro, Ambassador of Japan to the Republic of Moldova and H.E. Revenco Ana, Minister of Internal Affairs of the Republic of Moldova signed within the Ministry’s premises, the Exchange of Notes regarding the implementation of “The Project for the Improvement of Fire Fighting Equipment  (Grant up to 1,549 mil. JPY).

Minister Revenco expressed her appreciation that Japanese grant would be used to provide 19 firetrucks and over a million Moldovans would be benefited from it. Minister Revenco stated that Japanese firefighting experts have visited Moldova to conduct field studies to provide the most suitable firetrucks for Moldova and after the delivery, the experts would provide technical support, which would contribute to save more lives, enhance the firefighting service and provide high-quality support for Moldovan citizens.

Ambassador Katayama stated that Japan has been providing support to Moldova since 1993 in the area of agriculture, healthcare and culture etc and this grant for firefighting was a tailor-made support for Moldova to provide the most suitable equipment after field studies by Japanese experts. Ambassador Katayama wished that firefighting equipment would be made the most of use for Moldova, not only for fire extinguishing activities, but also for coping with natural disasters such as floods and for emergency lifesaving of traffic accidents.

At the same time, Ambassador Katayama stated that this grant would strengthen relationship between Japan and Moldova which respect the principles of democracy, rule of law, protection of human rights and market economy.